Please subscribe to keep reading. You can cancel at any time.
Already a subscriber?
Log in or Activate your account.
Loading&hellp
No thanks, return to homepage.
×

Thanks for reading! Log in to continue.
Enjoy more articles by logging in or creating a free account. No credit card required.
Log in Sign up {{featured_button_text}}
You are the owner of this article.
Edit Article Add New Article
You have permission to edit this article.
Edit

Most rivers are dropping, but the risk of flooding is far from over.

“We can’t pretend this is over,” said David Pearson, a National Weather Service hydrologist who sounded the alarm about the potential for historic flooding in Nebraska and Iowa several days before it hit. “It’s going to be a long time before we see our rivers get back to normal.”

So if you’re on the fence about buying flood insurance, now is the time to do it, he said. There remains enough of a long-term risk that homeowners could still benefit despite the usual 30-day delay in effective date.

“Absolutely,” Pearson said. “For most people it doesn’t cost a lot, especially when compared to the out-of-pocket cost of repairing.”

A mixture of threats are ahead:

» Rain this weekend poses a short-term risk of renewed flooding across northern Nebraska and the Niobrara River Valley.

» Snowpack along the Big Sioux and James Rivers could send pulses of floodwater down the Missouri River in the weeks ahead.

» Snowpack in the Rocky Mountains will wash down the Platte River at some point in the next month or so.

Forecasts for this weekend are calling for ¼-inch to an inch of rain Friday into Saturday across portions of Nebraska. The latest storm track would deliver the heaviest rains across central and northern Nebraska. The system is too far away to be certain, so people should monitor forecasts.

“The flood risk is going to increase this weekend,” Cliff Cole, a meteorologist with the weather service office in North Platte said of northern Nebraska and the Panhandle. Something to hope for is that warmer weather in the days ahead thaws the ground enough in those areas that it can absorb runoff.

Even before this major flooding hit, Nebraska and Iowa were at a higher-than-usual risk of spring flooding because of saturated soils and high stream levels.

The arrival of spring Wednesday increases that because of the heavier rains and thunderstorms headed this way, said Ken Dewey, an applied climatologist with the University of Nebraska-Lincoln.

“It’s a big deal,” Dewey said of the potent mix of a water-logged watershed and the arrival of spring.

The snowmelt that will affect the Missouri is coming mostly from tributaries that feed into the river below Gavins Point Dam — the Big Sioux and James Rivers, for example. While the data aren’t easily available, Pearson said it’s his hunch that there’s more than the average amount of water in that Plains snow.

Worried about flooding? Take these steps.

Flood insurance: Think you might need it? Buy it now because it typically carries a 30-day waiting period.

Basements: If your basement tends to take on water, elevate whatever you can or bring things upstairs.

Urban flooding: Clean out the inlets to city storm drains and keep them clear.

Flood alerts: If you live along a river and are at risk of flash flooding, sign up for the United States Geological Survey’s stream level alerts.

The Missouri River will continue dropping over the next few days before turning around, probably at the end of March, and rising with snowmelt, Pearson said. At some point, he said, the Missouri River most likely will be back to flood stage.

“We don’t have enough time to get the (Missouri) river back to normal in between the record, historic event that we’re coming out of and the beginning of the Plains snowmelt,” he said.

What’s not an immediate threat is the larger geographic area of Plains and mountain snowpack that is held back by the five massive dams above Gavins Point Dam. The dam system has about 96 percent of the normal space available to store runoff, according to the U.S. Army Corps of Engineers, which manages the dams.

Snowmelt flowing into the Platte River is a concern, but that is still some time away, said Jerilyn Billings Wright, a meteorologist with the weather service in Hastings.

In the meantime, people need to be careful, Cole said, especially when driving.

“One thing we know is our infrastructure, our road system, has been weakened by the previous flood,” Cole said. “We don’t know if it’s to the point where what’s normally a minor flood situation is going to cause significant damage to a weakened structure. Be very careful driving.”

The Elkhorn River at the Maple Street bridge is shown under water Monday March 18, 2019.

Floodwaters from the Elkhorn River have gone down and now expose a heavily damaged West Dodge Road.

Floodwaters from the Elkhorn River have started to recede, exposing a heavily damaged West Dodge Road.

A cow makes its way through floodwaters near Columbus, Nebraska, on Friday.

A shell of the Spencer dam is left on the Niobrara River.

Floodwaters engulf a farm near Missouri Valley on Friday.

Floodwaters flow over a railroad bridge near Arlington, Nebraska, on Friday.

Floodwaters make their way into North Bend, Nebraska, on Friday.

The Elkhorn River encroaches on Waterloo on Sunday.

A portion of Highway 92 has been destroyed by floodwaters in western Douglas County.

A levee breach is shown on the Platte River near Ashland on Sunday.

Valley is shown inundated by floodwaters on Sunday.

An aerial view of Missouri Valley near the Interstate 29 exit on March 15.

An aerial view of Missouri Valley as floodwaters continue to impact the area on Friday.

A house is surrounded by floodwaters near Waterloo, Nebraska, on Friday.

Floodwaters swallow the town of Rogers, Nebraska, on Friday.

Water recedes in the town of Niobrara Neb. The highway showing is Hwy 12 and Hwy 14 Junction.

The Morman bridge on Highway 12 between Niobrara and Niobrara State Park was wiped out by a flood.

A train is stopped on flooded tracks next to the Platte River near Cedar Creek, Nebraska, on Friday.

Highway 75's northbound lane is closed because of flooding near Merritt's Beach RV Park on Friday.

A Nebraska National Guard helicopter flies over areas flooded by the Platte River near Columbus, Nebraska, on Friday.

Highway 81 covered in floodwaters south of Columbus, Nebraska, on Friday.

An aerial view of Missouri Valley, Iowa, as floodwaters continue to impact the area on Friday.

The National Weather Service in Valley, Nebraska was evacuated due to flooding.

A truck drives through a flooded road near the Platte River.

Be the first to know when news happens. Get the latest breaking headlines sent straight to your inbox.

Be the first to know

Get local news delivered to your inbox!

Related to this story

An aerial view of Missouri Valley, Iowa, as floodwaters impacted the area on Friday.

The Nebraska Department of Health and Human Services said Tuesday that six public drinking water systems aren't in operation, including ones in Bristow, Peru and Sarpy County Sanitary Improvement District 97. Nearly 50 wastewater treatment systems, including ones connected to Omaha, Arlington, Nebraska City and Columbus, have reported bypasses or other problems.

Flooding of base forces cancellation of Offutt air show in June

In a press release, Wing Commander Col. Michael Manion described the flooding as a "historic disaster" that has made hosting this year's event "untenable."

Steve Nelson, president of the Nebraska Farm Bureau, estimated that there will be $400 million to $500 million in livestock losses and about $400 million in crop losses because spring planting will be delayed or canceled.

From the banks of the Platte River, the Otoe Indians gave the wide, meandering waterway a name: Nebrathka. Roughly translated: flat water.

Audit links more than $700,000 in questionable spending to fired village clerk in Pilger

Courses for two April races may be impacted by flood damage

Two new long-distance races in the Omaha area may have to reconsider routes after courses were impacted by flooding.

The National Weather Service expects the Missouri River levels at Omaha to fall below the 29-foot flood stage by Saturday night.

Offers of help for Nebraska farmers and ranchers pour in; hay is No. 1 need

Hay is going out to help farmers and ranchers as quickly as people donate it.

The move opens the door to federal aid to help state, tribal and local recovery efforts. Gov. Pete Ricketts requested the declaration, which can take weeks or months in some cases.

'I can't bathe kids in a bottle of water': What it's like living with water shortages

In areas like Boyd County and Glenwood, water shortages and boil-water orders could last for weeks as critical water and sewer infrastructure is repaired.

'Some of them begin to cry': 'Overwhelmed' flood victims grateful for aid, generosity of others

“They come in overwhelmed by what they have lost at home, and some of them begin to cry,” said volunteer Sabrina Ayala. “Then they see all the volunteers and the support. They are amazed. I’ve heard ‘Thank you’ so many times this week.”

The Corps of Engineers' explanations of what it did and why will do little to soothe people who experienced flooding along the Missouri River, and political leaders are leveling varying degrees of criticism.

The updated schedule will be welcome news to Interstate drivers and towns along highways used as Interstate detours.

Watch Now: Could 2020 be the hottest year on record globally?

Watch Now: Could 2020 be the hottest year on record globally?

Staying safe in the heat

Staying safe in the heat

Here’s What to Avoid When Buying Toys for Your Pet

Here’s What to Avoid When Buying Toys for Your Pet 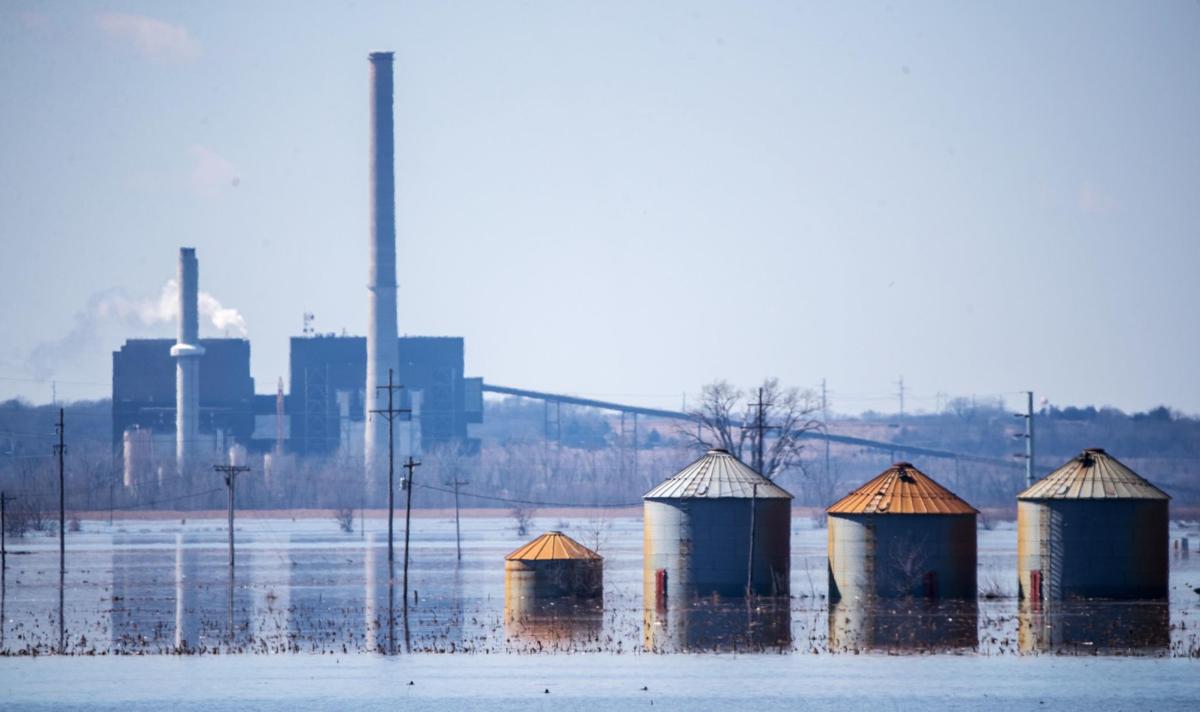 Grain bins are surrounded by floodwater west of Hamburg, Iowa. In the background is the Omaha Public Power District’s coal-fired power plant in Nebraska City. With the arrival of spring, heavy rains and thunderstorms could add to the risk of continued flooding. 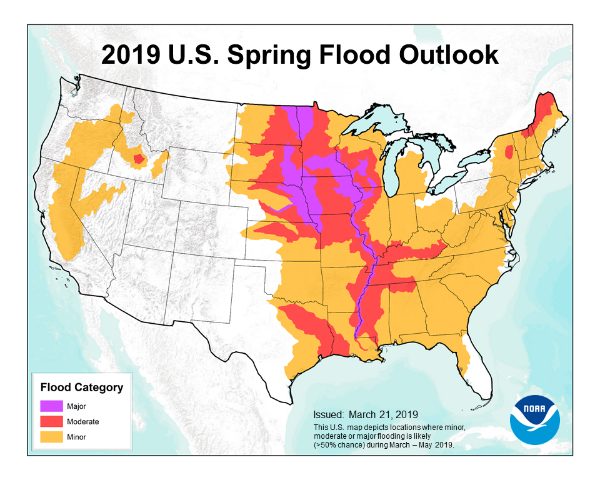 States that have experienced recent historic flooding remain at highest risk of flooding during a spring that is expected to carry a widespread risk of at least minor flooding. The National Weather Service on Wednesday released its flood forecast for the spring.

Get up-to-the-minute news sent straight to your device.